In a legal environment, seemingly familiar terms can have different meanings than what you might think. When you’re reading a criminal records report from PeopleFinders, you’ll need to understand the implications of the legal terms you’re seeing in full to make use of a report.

One term that’s had its meaning transformed by popular culture is “robbery.” When you read about a robbery in a criminal records report, make sure not to confuse it with “theft” or “burglary.” You’ll find that it means something more specific – and that such a distinction has a significant impact on the way each type of crime is addressed in court. 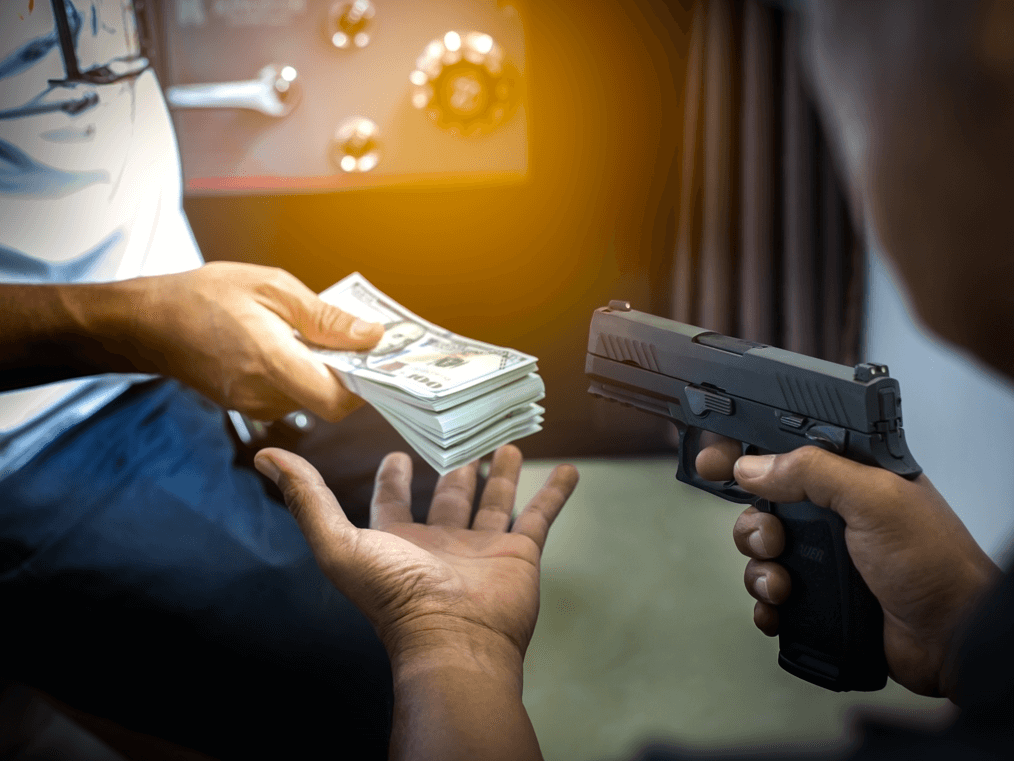 What is a Robbery?

A robbery is a subset of theft. When a legal professional uses the term “robbery,” they’re describing a theft that was accomplished via violence or a theft that was conducted by violent means. Robbery can also describe theft wherein the threat of violence was present, but no one was actually harmed.

The aforementioned violence can come in the form of physical or sexual violence. You’ll need to read a criminal records report carefully to determine whether or not a defendant accused of robbery approached another person while armed with a weapon or not. These details – and the manner of violence that either took place or was threatened – will determine the degree of the robbery.

How Do Different States Define Robbery?

While each state will have its own ranking scale for robberies, there remains a skeleton definition that an event must meet to be considered a robbery. Theft is only a robbery if:

What’s the Difference Between Theft, Robbery, and Burglary?

Violence differentiates a robbery from theft or burglary. Even so, these terms frequently have their definitions confused. For clarity’s sake, you can break the above terms down as follows:

Most often, you’ll be able to identify a proper robbery by assessing the force a person puts behind it.

That said, timing also contributes to the classification of a theft as a robbery. The aforementioned force must be applied during the act of theft for the event to be considered a robbery. If a thief uses violence when fleeing the scene of the theft, they can be charged with assault but not with robbery. This is because they’ll have already procured the item they were after, and they wouldn’t have been using violence at the time to procure it.

What Are the Degrees of Robbery?

Depending on the type of weapon a person brought to a robbery, these types of threats can be considered “aggravated robberies.” Note that this classification also depends on the kind of tools with which the victim was able to defend themselves. If an unarmed victim is threatened by an armed robber, then certain states will consider that power imbalance to escalate a robbery into an “aggravated robbery.”

Under certain circumstances – for example, a bank robbery – these classifications are considered on a federal level. The more significant the robbery is (in wealth lost, violence enacted and so on), the more likely it is to fall under federal jurisdiction.

What Does a Robbery Mean in a Criminal Records Report?

You need to carefully read the results of a criminal records check. When “robbery” appears in these results, you may be able to determine the degree of violence with which a victim claims to have been threatened. Make sure to assess the data in your report carefully, though – notation of a robbery does not designate a conviction or acquittal, but rather the report given to the court by a victim or eyewitness.